At a secret location in the heart of Devon, our in-house aircraft engineer Alan, who also happens to be one of our Software Support Specialists, began work on the construction of our exhibition stand for MRO Europe. As you will have read in our previous blog article, Building Our MRO Stand: Part 1  we have set about constructing the stand from reclaimed aircraft components, which we were able to salvage from our friends at eCube Solutions.

Alan’s first job was to disassemble all of the smaller salvaged parts and attempt to re-engineer each element and make them suit the rudimentary, single page sketch he had been handed by the marketing team.

With everything in front of him, Alan then marked out the footprint of the booth and laid out all the parts in a rough configuration that to suit the design.

The centre piece of the stand and the main focal point for the exhibition is a podium style counter. This piece would be formed by a section of leading edge intake section of engine cowling. Two countertops would then be created from in-board leading edge slats, trimmed to match the profile of the centre cowling…we’re not telling you which aircraft the parts have come from; if you want to take an informed guess you can visit stand 680 at MRO Europe, where we have 2 bottles of champagne and 2 iPad minis to give away if you enter our prize draw.

With all the parts carefully, and I might add expertly, assembled and fabricated we had to set about finishing them off to a standard that would be expected of a company promoting, quality and competence.

After an intensive polish we again called upon the services of some specialists. With the help of Flybe Aviation Services we were able to give the components a paint job that really finished them off.

After weeks of work, lots of late nights and approximately 4 gallons of tea we are ready for a rest before the stand and our cutting edge software are unveiled in London next week. 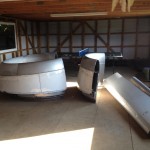 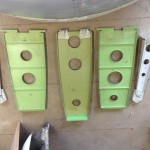 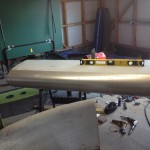 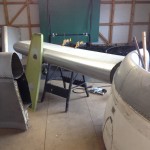 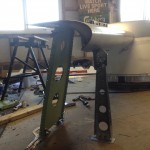 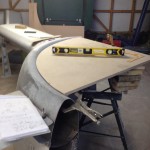 x
We use cookies on our website to give you the most relevant experience by remembering your preferences and repeat visits. By clicking “Accept All”, you consent to the use of ALL the cookies. However, you may visit "Cookie Settings" to provide a controlled consent.
Cookie SettingsAccept All
Manage Cookie Consent

This website uses cookies to improve your experience while you navigate through the website. Out of these, the cookies that are categorized as necessary are stored on your browser as they are essential for the working of basic functionalities of the website. We also use third-party cookies that help us analyze and understand how you use this website. These cookies will be stored in your browser only with your consent. You also have the option to opt-out of these cookies. But opting out of some of these cookies may affect your browsing experience.
Necessary Always Enabled
Necessary cookies are absolutely essential for the website to function properly. These cookies ensure basic functionalities and security features of the website, anonymously.
Functional
Functional cookies help to perform certain functionalities like sharing the content of the website on social media platforms, collect feedbacks, and other third-party features.
Performance
Performance cookies are used to understand and analyze the key performance indexes of the website which helps in delivering a better user experience for the visitors.
Analytics
Analytical cookies are used to understand how visitors interact with the website. These cookies help provide information on metrics the number of visitors, bounce rate, traffic source, etc.
Advertisement
Advertisement cookies are used to provide visitors with relevant ads and marketing campaigns. These cookies track visitors across websites and collect information to provide customized ads.
Others
Other uncategorized cookies are those that are being analyzed and have not been classified into a category as yet.
SAVE & ACCEPT