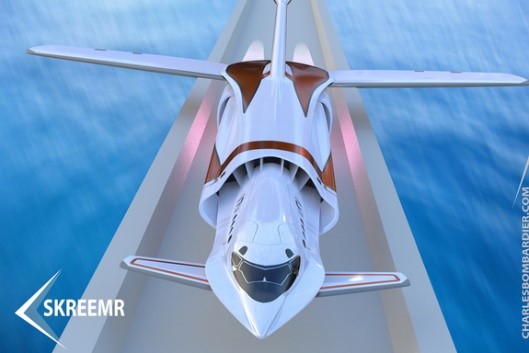 Canadian engineer and inventor, Charles Bombardier, has unveiled a concept design for a hypersonic passenger jet, the Skreemr.

Bombardier’s design claims the Skreemr could reach speeds over Mach 10 (7673 mph or 12345 kph) by harnessing nascent technology. This would make the aircraft around five times faster than Concorde, and would mean travel between London and New York would take just half an hour!

Scramjet engines, otherwise known as supersonic combustion ramjets, are currently being developed in China and the US, and burn hydrogen and compressed oxygen drawn in from the atmosphere passing through the vehicle rather than from an on-board tank, enabling the aircraft to be smaller, lighter and faster.

Bombardier envisages the design to use clean electricity for the magnetic railgun, with the scramjets burning hydrogen manufactured with hydroelectricity.

One challenge the aircraft would still face, however, is how it would withstand the high temperatures it would reach by travelling at such a fast speed, which could be as high as 980°C. This could affect the development of the aircraft as it may be more problematic to source affordable materials which are effective in supersonic flight.

Although Skreemr remains just a concept at this stage, it paves the way for future innovative aircraft design. Bomarbier says “the Skreemr concept aims to ignite your imagination around this idea.”

To read more about new innovative solutions click here to read about our pioneering competency and compliance aviation management tool.